My first car was a Yugo. (pause for laughter)  In my defense, I lived in California and it was all I could afford. I have to say the payment of only $100 a month was still too high for this disposable car.

This is exactly what my car looked like, minus the happy people around it. 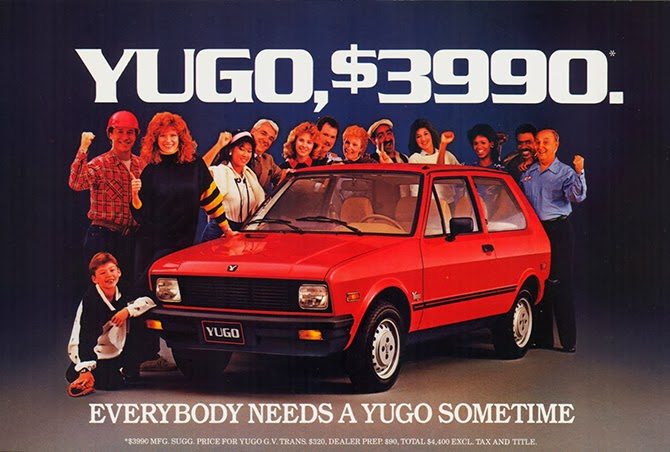 The good thing about Yugo's is that no cop in his right mind will write a ticket to someone for going 90 MPH in a Yugo.  I was in my 20's and had a bit of a lead foot, but was never given a ticket.  My theory was that they would get laughed out of the precinct for that one.

It had no glove compartment, but what it did have was a zipper in the back of the drivers seat.  I have to say that when you get pulled over for speeding at 2 am, having to get out of the car, take off the drivers seat cover to get the registration out of the back of your seat, then reassemble the seat, serves as a sobriety test.  I am not exactly sure how the cop kept from laughing outright at this insane process.

My car was decked out with a Garfield in the window, fake sheepskin seat covers, and a steering wheel anti-theft device.  Just the thought today that someone would want to steal this car makes me laugh.  I can say that someone did break my window to steal the Garfield.  Seriously...

Less than a year after purchasing this car the engine seized up and the car died.  I am sure it had nothing to do with my driving, but the anti-theft device worked.  It has been Toyota's and Honda's ever since.

What was your first car?