My cat: Does he understand me or is it OCD? 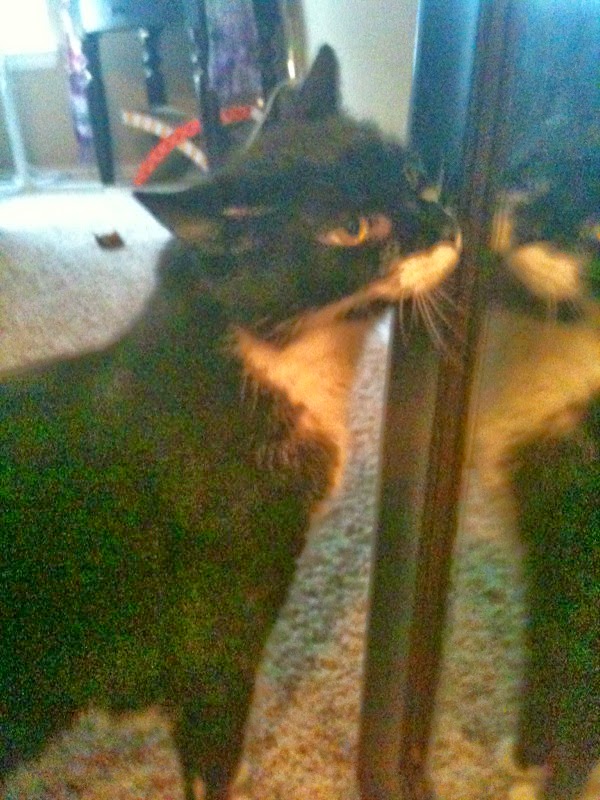 My pet sitter/co-worker took this picture with her phone, that's why the quality is bad, but I felt this reflected his personality the most. He is a little love bug and looks at himself in the mirror all the time.

I adopted Boots, along with his brother Whiskers, back Jan 1, 2006.  They were terrified of everything, but warmed up to me quickly when I got sick and was home in bed for 3 days.  Once they know you, they are the sweetest cats you could ever meet.

Whiskers went to the rainbow bridge in 2011 and Boots hangs here entertaining me or demanding my attention with drive by attacks when I'm on the computer too much.

Boots was around 5 when I got him, so he's around 13 now.  He had Hyperthyroidism, which I treated in 2007.  I found out last year that Mr. Boots has stage 3 kidney disease and a kidney stone.  My vet, The Cats Meow, basically said that surgery would do more harm than good.  We can treat the urinary tract infections as they come up and manage the pain as needed.

Cat people know what that means, I get to watch the litter box very closely.

When it come to Boots, when I don't behave right he pees on the carpet.  When I travel, even though he loves Genice, he will pee on the carpet right by the front door.  "How dare you leave me mama!"   Also, if I let things get cluttered he stops peeing in the box.

If I change litters, (I know, I  know...Cat manual page 1) he will pee right outside the box.  Honestly, this change was all about me!  I thought that since I use Tidy Kat I could get the light stuff.  You know, the one where women are throwing it to each other in the commercials. I'm thinking "It's the same brand, no problem."  I live on the 3rd floor, of a walk up building and it makes my life a little easier.

Boots hated the idea, he will poop in the box and pee on the floor.  The litter is very dusty and makes him sneeze when he scratches in it.  I mixed some other litter he has used before and he had no problem with it previously, but no improvement.

So yesterday, I sat this little face down and explained that if he didn't start peeing in the box he was going to have to see the vet to make sure there isn't something wrong.

This morning I check and sure enough he peed IN the box.  That little boy understood exactly what I said, or did he?

Yesterday, I finally got the donations building up in the living room out and into my car. So, it could also be because he is a little OCD and wanted that stuff out of the house.   My boy has attitude!

Either way, he is using the box again!!!

Time to restock on my Sportzyme to get the pee out of the carpet and sub-flooring.  I love that stuff.  It works with the smell, but it takes time usually 2-3 days.  It is environmentally safe and Kitty safe.

Go to my website if you are interested in ordering some.  The link is BrendaJenkins.norwex.biz -Home Essentials - Sportzyme